One of the very best things about a holiday is the outward journey, the time when your mind is free to drift to the infinite possibilities ahead. If you’re travelling by ferry to France, these moments can be spent lounging on the deck and gazing at the horizon, dreaming of your destination and all its promising wonders. And as well as the amazing attractions you’ll visit and the day trips you’ll take, one other topic will no doubt be on your mind – the wonderful French food you’ll sample along the way!

As the Arc de Triomphe has to be seen to be believed, France’s cuisine has to be experienced. This country’s history and culture are found as much in its dinner plates as in its glorious monuments.

There are so many typical French meals that await you, so we have narrowed a few specialities for you to try. Our selection will take you to Grenoble, Paris, Lyon and Lille and allow the nation’s signature joie de vivre to tempt your taste buds. 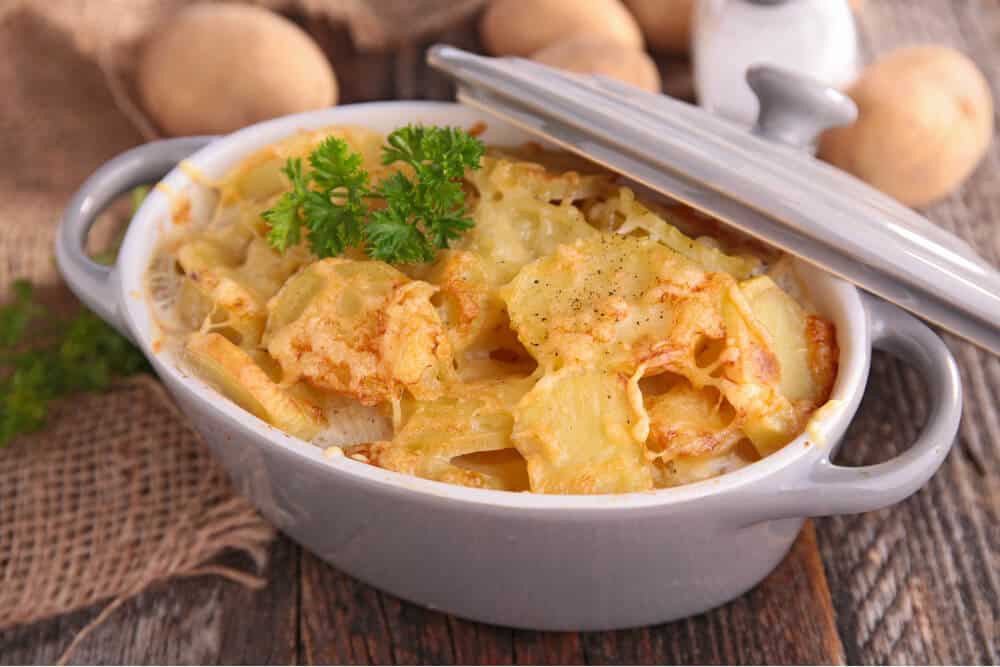 Everyone knows of France’s intense relationship with cheese, but what about the one the country cultivates with potato? For decades, the local population believed this modern staple to be poisonous, but that all changed in the 18th century when King Louis XVI was told of the remarkable nutritional values found within – as well as the delicious taste of course.

Potatoes are also at the centre of the richly satisfying gratin dauphinois. Grenoble, the former capital of the region, is today famous for having its own Bastille, a fortress overlooking the city, and for preserving the original recipe of the gratin dauphinois – sliced potatoes, milk, butter, whipping cream, garlic, and no cheese! The luxurious blend is then oven-baked until the first layer of potatoes becomes appealingly crispy. This dish is a local favourite throughout the year, so you’ll be able to enjoy it whenever your next visit to Grenoble. 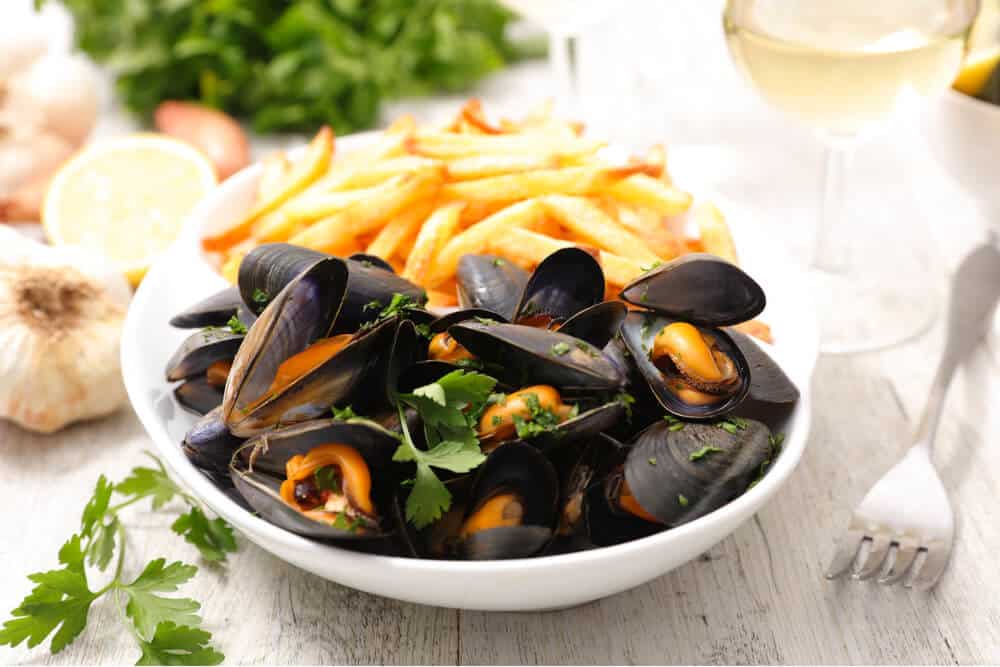 Borrowed from neighbouring Belgium, moules-frites have become symbolic of northern France today. During Lille’s gigantic annual flea market, tourists look for collector items and to enjoy the savoury speciality. As its name indicates, the dish consists of two ingredients: mussels and chips. Usually harvested from May, mussels are molluscs that further attest to the French’s appetite for squishy food. (Snails and scallops, also known as coquilles Saint-Jacques, are famously on their menu too). Similarly, their taste for potatoes is again made apparent here: Bintje is the potato recommended to obtain the chips that accompany the mussels as once cooked, this variety retains a tender texture for a luscious melty sensation upon taste. The mussels themselves are not boiled for more than ten minutes, and they can either be marinated in white wine or covered with cream. Furthermore, the moules-frites sometimes come with Normand camembert on the side. Decorum commands to not eat the mussels with your bare hands, but it can be a fun activity for the kids to catch the mussels using an empty shell as pliers. Parents, give it a try too – we won’t tell anyone. 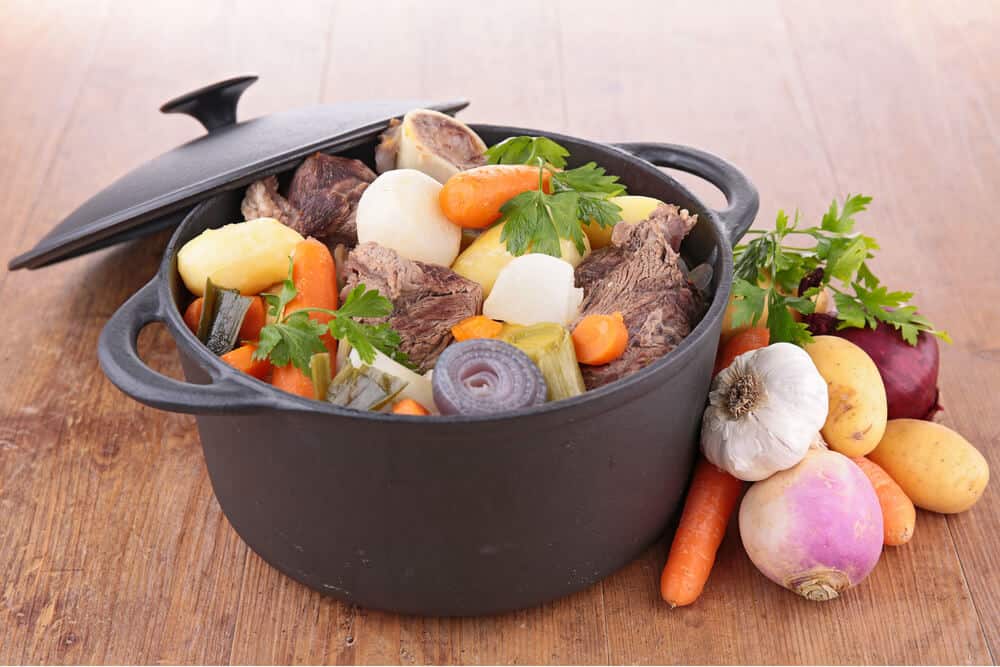 The pot-au-feu is France’s rustic, heart-warming jewel. King Henry IV announced in 1600 that “I want no peasant in my kingdom to be so poor that he cannot have a poule au pot on Sundays.” While the recipe differs by region (‘pot-au-feu’ literally means ‘pot placed on a fire’), this tale is why celebrated chef Raymond Blanc says the meal “honours the tables of the rich and poor alike.”

Indeed, pot-au-feu is so admired that the city of Lyon joyfully turns on a public stove to cook and serve its people each spring or winter during a buoyant communal meal that is open to all. There is real pride in sourcing the vegetables and meat for the dish from local butchers and greengrocers, a shopping pilgrimage that then gives way to a truly alchemical operation. The collected fresh celery, leek, garlic, turnip and potatoes, as well as generous chuck steak and chiselled short ribs, are gradually added, depending on how long they take to cook, into a searing, but not boiling, cauldron to give birth to a rich and comforting pot-au-feu. To deepen the broth’s colouring, an onion pierced with cloves can be thrown into the vibrant mixture. Join the ceremonial lunch for some jovial company, or book a table in a restaurant any time of the year – just don’t leave Lyon without replenishing your energy supplies with a succulent pot-au-feu.

To close our quick tour of France’s most cherished specialities, we just have to mention both Paris and a dessert. So what better method than introducing you to a typical Parisian cake? This luxurious treat is a tribute to the capital’s famous opera house Palais Garnier, situated at the top of a boulevard that leads to Le Louvre. Renowned cake shops have settled on each side of the prestigious avenue, and both Dalloyau and Lenôtre lay claim to the opera delicacy’s invention. Whoever came up with this brilliant yet disarmingly simple recipe should certainly be profusely thanked: layer upon layer of almond sponge (called Joconde), coffee syrup and buttercream, chocolate ganache and a chocolate glaze finish – this is heaven on a small plate. You will love it so much you should take away a slice (or two) to eat on your way home to the UK.