Home to stunning scenery, ancient architecture, and famously hospitable locals, Scotland is the perfect place for a holiday. And taking our ferry crossing from Larne to Cairnryan means you’re in an ideal location from which to explore it all. This pretty coastal town is close to the popular Scottish cities of Edinburgh, Glasgow, and St Andrews, and you’re also well-placed to explore northern England, too. Interested? Take a look at some of the best road trip destinations that are accessible from our Cairnryan port. 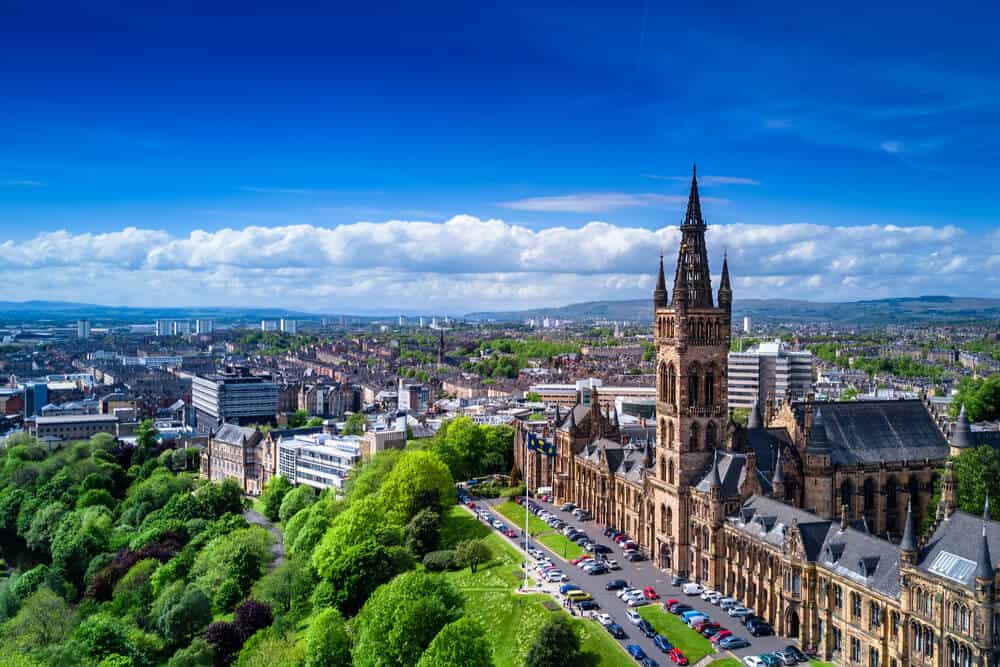 Just under two hours’ drive from Cairnryan is Glasgow, Scotland’s largest city.  As a former hub of Victorian industry, a pioneering spirit is at the heart of everything you see in this exciting metropolis. A stroll through the city is all you need to get a taste of the area’s innovation, with a diverse mix of remarkable architecture housing new creations in every form – from gastronomic inventions to some of the UK’s brightest new music. History buffs will love a visit to Glasgow Cathedral, which stands tall in the centre of the city, and the Glasgow Necropolis, a stunning 19th-century cemetery. The city also makes a great stop for those wanting to explore the natural beauty of Loch Lomond, where you can enjoy a spot of boating, rock climbing, winter snow sports, or a round of golf at The Carrick. 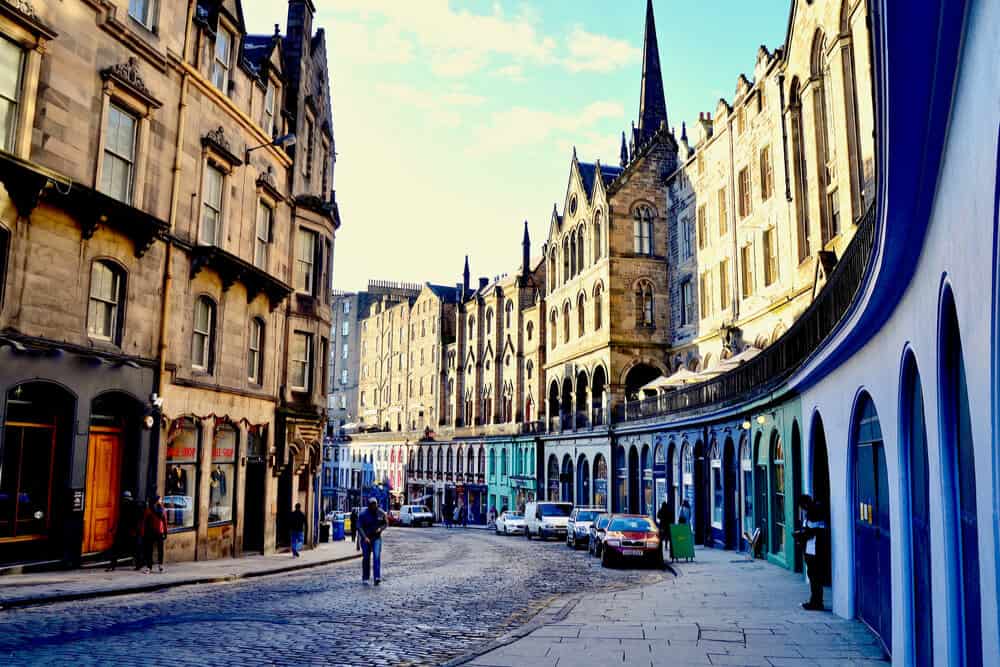 Just over 2.5 hours from Cairnryan port you’ll find Edinburgh, placed as it is along the country’s east coast. From the Old Town’s patchwork of medieval tenements along the Royal Mile, to the New Town’s sweeping neoclassical elegance, there’s no question that Edinburgh is one of the world’s most enthralling cities. All in all, it’s a place that’s wonderfully entwined with its surrounding landscape – with buildings and monuments perched atop volcanic rocks (like the famous Edinburgh Castle), or overshadowed by craggy cliffs – and, as such, offers a constantly changing perspective. Like a cherished book, Edinburgh is a city you’ll want to dip into again and again to savour a different experience each time – from its world-famous Fringe Festival and exciting food scene to its bright and wild nightlife. No trip to the Scottish capital would be complete without sampling a dram of the city’s world famous whisky. Enjoy fine aged blends at one of the many whisky bars, or take a barrel ride through the distilling process at the interactive Scotch Whisky Experience.

Road trip to the Lake District

It may come as a surprise that the Lake District is only 2.5 hours away from our Cairnryan port. England’s largest National Park, it spans 2,362 square kilometres of unspoilt scenery, and encompasses Scafell Pike – the country’s highest mountain, as well as lakes, summits, and rolling farmland. Though it received National Park status in 1951, the northern ranges of the Lake District are said to be 500 million years old. Signs of settlers to the district date as far back as 5,000 years ago, with mountain ranges being a vital source of stone – both for weaponry and for the creation of sacred stone circles across the region. The terrain also contained copper, iron and coal, and there’s evidence of Celts, Romans and Vikings living within its borders. In the Victorian period, grand mansions started to spring up around the lakes – particularly Lake Windermere. Many still stand today, including Wray Castle, a Gothic-inspired stately home built in 1840 which is now open to the public. 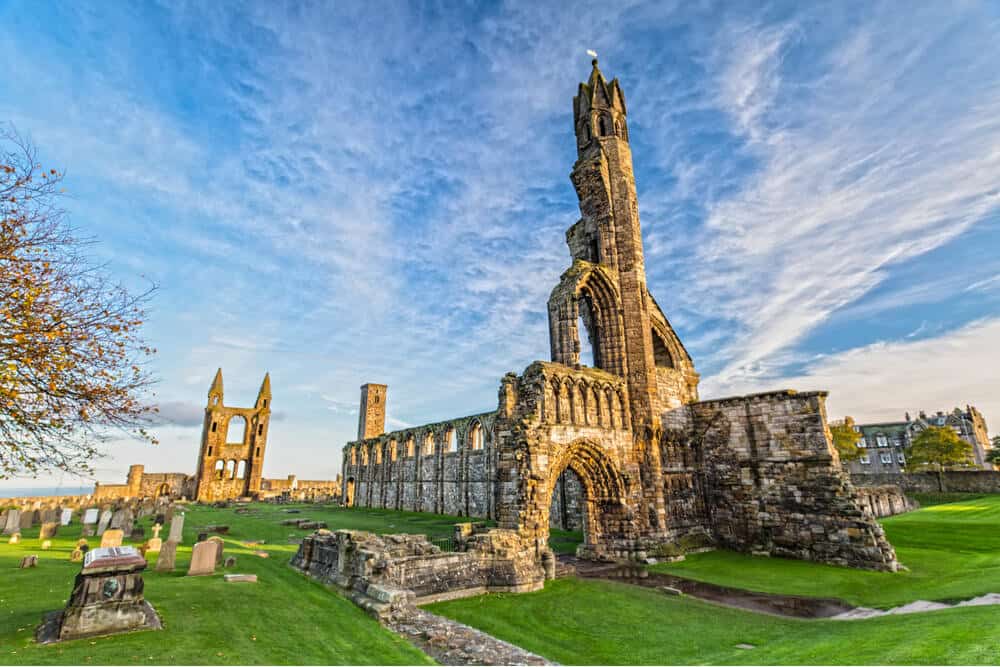 If you’re visiting Edinburgh from Cairnryan, it wouldn’t hurt to drive a little further north east and make a detour to St Andrews. If a long weekend exploring impressive medieval ruins, visiting stately university buildings, walking along pristine beaches, and dining in excellent restaurants appeals, look no further. Despite being a tiny and rather remote town, St Andrews has made a big name for itself. In ancient times, it stood out as a centre of religious pilgrimage thanks to its colossal cathedral, but nowadays, it’s more famous for being the home of Britain’s third oldest university, where Prince William, Duke of Cambridge, and Catherine, Duchess of Cambridge, graduated together in 2005. It has also accrued status as the international “home of golf” thanks to St Andrews Links. While one of the world’s oldest golf courses may have propelled the town to global fame, that’s just one of many attractions that make St Andrews one of the most unique and exciting places to visit in Scotland.

Looking forward to this incredible adventure? Book your journey to Scotland with P&O Ferries now!